Students from Netherlands-based Eindhoven University of technology have built a 4-seat electric car weighing a slender 300 kg – made from a flax sandwich material with a PLA core. It is the first time a car body structure has been made from a biocomposite. 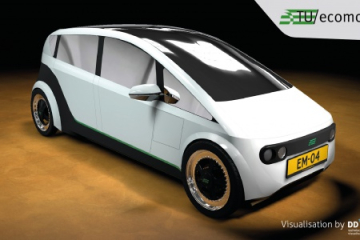 As reducing vehicle weight took over as a priority in the design and production of new cars, carmakers have increasingly resorted to the use of light materials, such as aluminium and carbon-fiber composites, for the body chassis structural parts. The TU/ecomotive team of students responsible for the design of Lina, however, chose a different solution. Using sandwich panels comprised of flax-based composite with a PLA honeycomb core for Lina’s chassis, they have shown that bio-based materials can deliver the required strength, without the weight, needed for an energy-efficient, light-weight, modern-day connected urban minicar.

They call their approach, characterized by their drive to consume the least possible about of energy during production through the use of sustainable materials, “reduction during production”. Efficient and practical, Lina offers a sustainable choice, from cradle to grave.

A redesigned battery pack from Nova will make swapping batteries easy and convenient, while paving the way for new battery technologies. In response to the recent car sharing trend, the latest NFC technology has also been incorporated into Lina: users gain access to the car using a smartphone or a card with an NFC chip. The car will recognize the user by the unique NFC code, and activate his or her personal user settings, such as playlists, frequent destinations or telephone contacts.

The next step is to put Lina through her paces out on the street. To that end, the car will 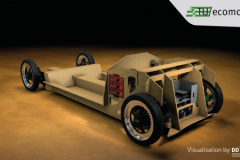 undergo an inspection at the RDW Netherlands Vehicle Authority to receive a licence number, which will enable the car to be driven on the public roads. Lina will be presented some time before the summer of 2017. (KL)