The prestigious Global Bioplastics Award, presented annually at the end of the first day of the European Bioplastics conference, was won this year by Bio4Self, a consortium of research institutes and companies collaborating on a project to develop self-reinforced composites based on PLA fibres.

The project has yielded a biobased and easy-to-recycle self-reinforced composite material based on PLA fibres with an inherent high stiffness. It has been a whirlwind year for the Bio4Self project: in March, a prototype car seat shell made of the self-reinforced PLA material – an application developed within the scope of the project t- took an Innovation Award at the JEC World show in Paris. In May, it was awarded a second Innovation Award at the Techtextil technical textiles show in Frankfurt. 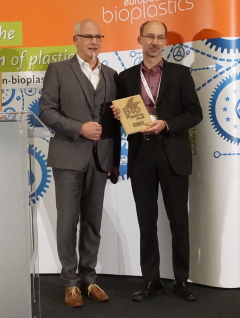 concept. "It shows, that the intelligent combination of different forms of the same versatile bioplastic material PLA can lead to sophisticated solutions that enable the use for much more than just packaging applications," said Michael Thielen, publisher of bioplastics MAGAZINE on presenting the award during the ceremony on 3 December in Berlin, at the 14th European Bioplastics Conference. The award was accepted by Guy Buyle, manager EU Research at Centexbel.

The consortium behind the project, which is funded by the European Research Fund H2020, includes among others, Centexbel (Zwijnaarde, Belgium), who is coordinating the effort; Fraunhofer ICT (Pfinztal, Germany) and the Institute of Textile Technology of the RWTH Aachen. There are a total of 15 actual partners and further a group of 9 partners who expressed their support to the consortium via a Letter of Support. The latter group forms the so-called Innovation Support Group or ISG.

The self-reinforced composite material (SRPC) developed within the scope of the project other partners is composed of two different PLA grades: a low melting temperature PLA grade to form the matrix and an ultra-high stiffness and high melting temperature PLA grade to form the reinforcing fibres. Easily recyclable and industrially biodegradable, the composites are designed for high mechanical strength and rigidity, as well as high temperature and hydrolytic stability, thus upgrading PLA to a material suited for more technical and demanding final applications.

The second prize went to Nölle Kunststofftechnik and Fraunhofer IAP (both Germany), for their New splint for bone fractures.
The novel splint made of PLA for immobilizing bone fractures can be repeatedly reshaped during treatment, such as, for example, when the swelling subsides. This is yet another sophisticated example for innovative applications with PLA.

This year's trophy was once again made entirely from bioplastics - 3D-printed from different PLA/PHA based compounds filled with wood and different metal powders fillers.