Avantium today inaugurates its plant-based MEG demonstration factory in Chemie Park Delfzijl, the Netherlands, bringing industry yet another solution to reduce the reliance on fossil resources. Hosting the opening are Nienke Homan, regional minister of the province of Groningen, the Netherlands and Avantium CEO Tom van Aken.

Avantium also said it had named its innovative technology to produce plant-based MEG ’Ray Technology™ - A Bright Step to The Future’.

“Avantium is proud to be the first company in the world to have brought three technologies to demonstration stage – our YXY® Technology, Dawn Technology™ and now our Ray Technology™,” said Avantium CEO Tom van Aken. “It truly demonstrates our ability to scale up and commercialize advanced technologies in the renewable polyester value chain.” 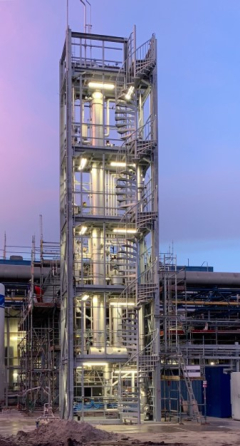 steps in converting industrial sugars to glycols, allowing for the production of MEG and MPG samples that are representative of the final product from subsequent commercial-scale plants.

According to Zanna McFerson, managing director of Avantium Renewable Chemistries, the opening of this demonstration plant signified ‘years of research and trials to achieve a significant step towards a commercial flagship plant’, which the company hopes to launch in 2024.

She added that commercial conversations are already ongoing with partners who see an economic opportunity with Ray Technology™.
Avantium is in talks with feedstock providers who wish to diversify their markets, chemical companies who seek to enter a significant growth market and transition to a bio-based economy and consumer brands who are looking for plant-based solutions for their textiles and packaging, she said.