Russia-based Rustark, located in the Special Economic Zone Lipetsk, has started construction of its new production plant, it said in a press release. 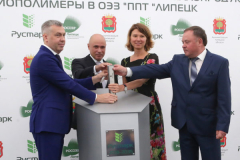 Rustark will produce starch products and biopolymers at the new plant, using wheat as feedstock.
The new facilities will be built in four stages over a period of 10-15 years, the company said. The first unit will have the capacity to process 500 tonnes of wheat per day and is expected to commence production in 2022.

The project represents an investment of over RUR 14 bln (EUR 200 million).
Special economic zones have been possible since 2005, when a federal law was enacted that allowed their creation. Companies settling in Lipetsk SEZ benefit from various advantages, from a state-run engineering infrastructure to tax holidays.

Out of this number, 15 companies are operational, 4 plants are under construction, and the remaining projects are in their run-up phase.