In the face of climate change and a growing human population the concept of a Circular Economy is becoming more and more important for the food and nutrient cycle. With the certified compostable plastic ecovio, BASF has developed a material portfolio for a variety of applications which can be used throughout the entire food cycle. 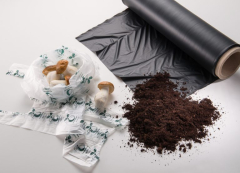 Now numerous studies by independent research institutions confirm the advantages of ecovio for the production, packaging and transport as well as waste collection of food, based on the material’s certified biodegradability in industrial and home composting as well as in soil. The studies show: food waste is reduced, nutrients are returned to the soil by means of greater volumes of compost generated and the accumulation of plastics in soil is avoided.

Thin polyethylene (PE) mulch films are used by farmers in many countries to increase crop yield. However, after harvesting it is often impossible for farmers to collect these films completely, especially when they are only a few micrometers thin. PE residues therefore find their way into the soil and accumulate there, since they do not break down. Now a study from ETH Zürich, Switzerland, has shown for the first time that soil microbes can use films made from the plastic polybutylene adipate terephthalate (PBAT) as food. The microorganisms use the carbon from the polymer both to generate energy and to form biomass. This means that PBAT biologically degrades in the soil and does not remain there as microplastic as PE does.

Ecovio M 2351 from BASF is a certified (EN 17033) soil-biodegradable plastic for mulch films, consisting of the biodegradable copolyester ecoflex (PBAT) and other biodegradable polymers made from renewable raw materials. Films made from ecovio M 2351 can be left in the soil after harvesting, rather than being laboriously removed and recycled. Naturally occurring microorganisms in the soil, such as bacteria or fungi, recognize the structure of an ecovio M 2351 mulch film as food that they can metabolize. The remaining end products after biodegradation by microorganisms are CO2, water and biomass.

The separate collection of organic waste is the prerequisite for the recovery of nutrients and hence a closed nutrient cycle. A number of pilot projects, e.g. in Berlin and in the district of Bad Dürkheim, Germany, but also in India and China, have shown that consumers collect significantly more organic waste with compostable plastic bags when they have easy access to the bags. Consumers then also collect food waste they would not ordinarily collect, such as oily, liquid food residues. In addition, the number of non-compostable bags thrown in the organic waste bin drops significantly.

Compostable dual-use bags made from ecovio enable larger amounts of kitchen waste to be collected for organic recovery in a clean, safe and easy way – and without sodden bags and unpleasant odors, since ecovio is tear and wet resistant. Under the conditions of an industrial composting plant, ecovio is fully biodegraded by microorganisms and their enzymes within a few weeks (as defined by EN 13432). The valuable compost can subsequently be used to increase the nutrient density in the soil, thus closing the nutrient cycle.