Clear but not clean? Plastic braces can harbor bacterial growth

A newly developed film could prevent bacteria from growing on the clear plastic dental retainers and aligners that increasingly are replacing traditional bulky, metal braces. 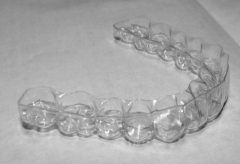 Millions of people According to the American Association of Orthodontists, more than 5 million people seek orthodontic treatments each year. These procedures include braces and aligners, a set of plastic pieces that shift the teeth slightly over time, in an attempt to fix crowded jaws, over- and under-bites and improperly aligned teeth.

Clear aligners or retainers, known collectively as clear overlay appliances, are made by taking a dental cast and using pressure or heat on a plastic sheet. Although they look more attractive than metal braces ever could, they come with their own set of problems: bacteria frequently build up on these, forming difficult-to-treat biofilms, and the plastics easily wear down. Scientists have turned to developing simple and affordable coatings to combat this. Drawing inspiration from super-hydrophilic antibacterial coatings on other medical devices, a team of Korean scientists from Yonsei University and Kyung Hee University in Seoul, Korea,
wanted to see if they could make something similar for clear overlay appliances.

Researchers Hyo-Won Ahn, Jinkee Hong and colleagues took a polymer sheet made of polyethylene terephthalate that was modified with glycol (PETG) and layered films of the biopolymers carboxymethylcellulose and chitosan on it. This layered film created a super-hydrophilic surface, or a surface that loves water, that prevented bacteria from adhering. When the PETG with the film was compared to the bare material, bacterial growth was reduced by 75 percent. The coated plastic also was stronger and more durable, even when tested with artificial saliva and various acidic solutions.