Evonik and Siemens have launched a joint research project to develop a platform for green chemistry based on carbon dioxide and electricity from renewable sources. 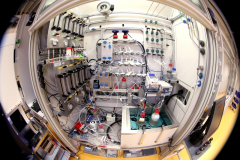 Two German industrial giants, Siemens and specialty chemicals manufacturer Evonik are collaborating on a project in which use will made of electricity from renewable sources and bacteria to convert carbon dioxide (CO2) into specialty chemicals.
Each is contributing their own core competencies to the partnership, with Siemens providing the electrolysis technology, which is used in the first step to convert carbon dioxide and water into hydrogen and carbon monoxide (CO) using electricity. Evonik is contributing the fermentation process, converting gases containing CO into useful products by metabolic processes with the aid of special micro-organisms.
The project, called Rheticus, was launched mid-January and will run for two years. Some 20 scientists from the two companies are involved in the project, which has received 2.8 million euros in funding from Germany's Federal Ministry of Education and Research (BMBF).

In the project, the two steps - electrolysis and fermentation - are scaled up from the laboratory and combined in a technical test facility.

The first test plant is scheduled to go on stream by 2021 at the Evonik facility in Marl, Germany which produces chemicals such as butanol and hexanol, both feedstocks for special plastics and food supplements, for example. The next stage could see a plant with a production capacity of up to 20,000 tonnes a year. There is also potential to manufacture other specialty chemicals or fuels.

In a press release, Dr. Günter Schmid, technical project responsible of Siemens Corporate Technology explained that the aim was to develop a platform that will allow chemical products to be produced more cost-effectively and in a more environmentally friendly way The new technology combines multiple benefits. It not only enables chemicals to be produced sustainably, it also serves as an energy store, can respond to power fluctuations and help stabilize the grid.

"With the Rheticus platform, we want to demonstrate that artificial photosynthesis is feasible", adds Dr. Thomas Haas, who is responsible for the project in Evonik's strategic research department Creavis. Artificial photosynthesis is where CO2 and water are converted into chemicals using a combination of chemical and biological steps, in a process similar to how leaves use chlorophyll and enzymes to synthesize glucose.

"Rheticus brings together the expertise of Evonik and Siemens. This research project shows how we are applying the Power-to-X idea", says Dr. Karl Eugen Hutmacher from the BMBF. Using electricity to generate chemicals is an idea from the Power-to-X concept. As one of the four pillars of the Kopernikus Initiative, the idea is to help convert and store renewable, electrical energy efficiently. At the same time, the Rheticus platform also contributes to the reduction of carbon dioxide levels in the atmosphere, as it uses CO2 as a raw material.
Evonik and Siemens see great future potential in the Rheticus platform. It will make it simple to scale plants to the desired size - the chemical industry will be able to adapt them flexibly to local conditions. In future, they could be installed anywhere where there is a source of CO2 - power plant waste gas or biogas.