Scientists and engineers from the University of Bath have developed biodegradable cellulose microbeads from a sustainable source that could potentially replace harmful plastic ones that contribute to ocean pollution. 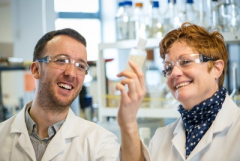 Microbeads are little spheres of plastic less than 0.5 mm in size that are added to personal care and cleaning products including cosmetics, sunscreens and fillers to give them a smooth texture. However they are too small to be removed by sewage filtration systems and so end up in rivers and oceans, where they are ingested by birds, fish and other marine life.

It is estimated that a single shower can result in 100,000 plastic particles entering the ocean, contributing to the eight million tonnes of plastic that enters the ocean every year. It is feared that the particles could enter the food chain, harming wildlife but also potentially ending up in our food.

As a result of recent campaigning by environmental groups, the UK Government has pledged to ban plastic microbeads in 2017.

Now a research team, from the University’s Centre for Sustainable Chemical Technologies (CSCT), has developed a way of producing a biodegradable renewable alternative to plastic microbeads in a scalable, continuous manufacturing process.

The beads are made from cellulose, which is the material that forms the tough fibres found in wood and plants. In this process our scientists dissolve the cellulose to reform it into tiny beads by forming droplets that are then “set”. These microbeads are robust enough to remain stable in a bodywash, but can be broken down by organisms at the sewage treatment works, or even in the environment in a short period of time.

The researchers anticipate they could use cellulose from a range of “waste” sources, including from the paper making industry as a renewable source of raw material.

They have published their results in the journal ACS Sustainable Chemistry and Engineering.

Dr Janet Scott, Reader in the Department of Chemistry and part of the CSCT, said: “Microbeads used in the cosmetics industry are often made of polyethylene or polypropylene, which are cheap and easy to make. However these polymers are derived from oil and they take hundreds of years to break down in the environment.

“We’ve developed a way of making microbeads from cellulose, which is not only from a renewable source, but also biodegrades into harmless sugars.

“We hope in the future these could be used as a direct replacement for plastic microbeads.”

Davide Mattia, Professor of Chemical Engineering and part of the CSCT, said: “Our goal was to develop a continuous process that could be scaled for manufacturing. We achieved this by working together from the start, integrating process design and chemistry optimisation, showing the strength of the multi-disciplinary approach we have in the CSCT.”

The beads are made using a solution of cellulose which is forced through tiny holes in a tubular membrane, creating spherical droplets of the solution which are washed away from the membrane using vegetable oil. The beads are then collected, set and separated from the oil before use. 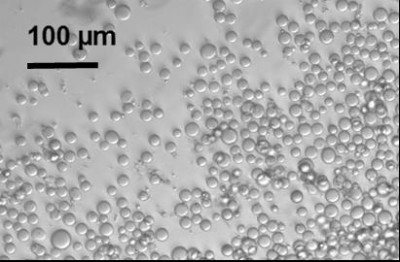 cellulose, for example making the beads harder. A team, led by Dr Scott and including Professor Davide Mattia (Chemical Engineering) and Professor Karen Edler (Chemistry) has also just been awarded funding of just over £1 million by the Engineering & Physical Sciences Research Council to develop porous beads, capsules and microsponges.

They will work with industrial partners, to develop materials that could be used in cosmetics and personal care products, or impregnated with agrichemicals for use in, for example, slow release fertilisers.