Researchers explore 3d-printing with cellulose instead of plastic

A new paper, published in the journal Advanced Materials Technologies, found that cellulose might become an abundant material to 3D-print with.  “Cellulose is the most abundant organic polymer in the world,” said lead author MIT postdoc Sebastian Pattinson.

Cellulose is “the most important component in giving wood its mechanical properties, explained Pattinson. “ And because it’s so inexpensive, it’s biorenewable, biodegradable, and also very chemically versatile, it’s used in a lot of products. And a lot of these kinds of products would benefit from the kind of customization that additive manufacturing enables.”
While using cellulose as a material for additive manufacturing is not a new idea, there were certain obstacles that needed to be surmounted. When heated, cellulose thermally decomposes before it becomes flowable, partly because of the hydrogen bonds that exist between the cellulose molecules. The intermolecular bonding also makes high-concentration cellulose solutions too viscous to easily extrude. 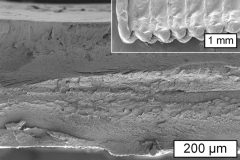 Which is why the MIT team chose to work with cellulose acetate — a material that is easily made from cellulose and is already widely produced and readily available. Essentially, the number of hydrogen bonds in this material has been reduced by the acetate groups. Cellulose acetate can be dissolved in acetone and extruded through a nozzle. As the acetone quickly evaporates, the cellulose acetate solidifies in place. A subsequent optional treatment replaces the acetate groups and increases the strength of the printed parts.
“After we 3-D print, we restore the hydrogen bonding network through a sodium hydroxide treatment,” said Pattinson, who noted that the strength and toughness of the produced parts were greater than many commonly used materials for 3-D printing, including acrylonitrile butadiene styrene (ABS) and polylactic acid (PLA).
The researchers went on to demonstrate the chemical versatility of the production process by adding a small amount of antimicrobial dye to the cellulose acetate ink and 3-D-printing a pair of surgical tweezers with antimicrobial functionality. “We demonstrated that the parts kill bacteria when you shine fluorescent light on them,” Pattinson said.

According to Pattinson, such custom-made tools “could be useful for remote medical settings where there’s a need for surgical tools but it’s difficult to deliver new tools as they break, or where there’s a need for customized tools. And with the antimicrobial properties, if the sterility of the operating room is not ideal the antimicrobial function could be essential.”
Because most existing extrusion-based 3-D printers rely on heating polymer to make it flow, their production speed is limited by the amount of heat that can be delivered to the polymer without damaging it. This room-temperature cellulose process, which simply relies on evaporation of the acetone to solidify the part, could potentially be faster, Pattinson says.
Cellulose acetate is already widely available as a commodity product. In bulk, the material is comparable in price to that of thermoplastics used for injection molding, and it’s much less expensive than the typical filament materials used for 3-D printing, the researchers say. This, combined with the room-temperature conditions of the process and the ability to functionalize cellulose in a variety of ways, could make it commercially attractive.

The research was supported by the National Science Foundation. (KL)