Two winners were honored at the presentation of the Annual Global Bioplastics Award, which, in accordance with tradition, took place at the close of the first day of the annual European Bioplastics Conference.

The winning companies - Zandonella, from Germany, and the Swiss Coffee Company, from Switzerland - tied for first place, both having garnered the exact same number of points from the jury, said bioplastics MAGAZINE’s Michael Thielen, who presented the companies with their prize.

Interestingly, both companies received the award for what was essentially a packaging application, although in both cases, the packaging was part of a larger idea about the product in question.

The Swiss Coffee Company's bioplastic packaging for their Beanarella coffee capsules is one aspect of a holistic approach to the life cycle of the product. The coffee used is all Fair Trade. The packaging is designed to satisfy the demanding barrier requirements for coffee packaging with regard to moisture, oxygen and aroma, but is at the same time certified compostable. “Coffee is good for the soil,” said Nick Schaude of Beanarella on accepting the award. “We use 100% compostable pouches and capsules. So we give it back after use. We cannot go on wasting commodities the way we have done until now. We have to change.”

Zandonella was recognized for the development of a PLA ice cream container designed to match the organic principles behind the company’s gourmet ice cream.
The 500 ml box itself is made expanded fine particle PLA foam from Synbra, while all the other components of the packaging are also made of renewable raw materials, as well as being suitable for industrial composting. It is highly functional: the ice cream will remain frozen without cooling for at least an hour. 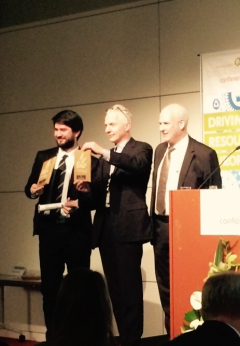 Both recipients were surprised and pleased with the honor. Werner Oelschlaeger, who received the award on behalf of the Zandonella team, said that he and the team were” very happy about the decision that was made in our favor.”
“Thank you to everyone who made this packaging system possible,” he said.

Nick Schaude, too, expressed his thanks. “We were proud to be nominated,” he said. “It’s a great honor to win!” (KL)