Biodegradable mulch films play an essential role in agriculture, providing benefits that are agronomical, economical and environmental. This has now finally been acknowledged by their inclusion in the EU Fertilisers Regulation. 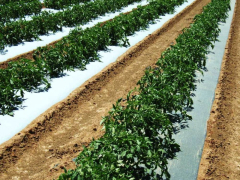 The European Parliament’s Committee on Internal Market and Consumer Protection (IMCO) has adopted its report amending the European Commission's proposal for a revision of the Fertilisers Regulation. In its report, the IMCO Committee acknowledges the innovative potential of biodegradable mulch films to provide positive agronomical effects and help to avoid the generation of microplastics on fields. European Bioplastics (EUBP), the association representing the interests of the bioplastics industry in Europe, welcomes the support for this modern and efficient agricultural practice by the members of the IMCO Committee as well as the opinion-giving expert Committees on Agriculture and Rural Development (AGRI) and on the Environment, Public Health and Food Safety (ENVI).

Biodegradable mulch films have been available on the market for more than 15 years, backed by solid scientific and technical knowledge, and meeting a high level of acceptance among European farmers growing fruits and vegetables. They play an essential role in modern agriculture as they deliver positive agronomical effects such as increasing yield, improving quality of crops, weed control, and reduction of water irrigation and pesticides. Additionally, they offer distinct advantages at the end of the crop cycle as they can be left on the field and ploughed under, which significantly reduces the agricultural plastic waste and potential soil pollution.

The inclusion of biodegradable mulches in the Fertilisers Regulation, with a clear link to the criteria of the upcoming European standard for the biodegradation of plastic mulch films in soil, will help to harmonise regulations across the EU Member States. The standard is expected to be published by the end of the year and will require complete biodegradation within 24 months as well as an eco-toxicity test.

European Bioplastics looks forward to continuing the dialogue leading up to the vote on the revised Fertilisers Regulation in the European Parliament’s Plenary in September.