Home
The tussle in Brussels: is PHA a naturally occurring polymer? Or a plastic?

The tussle in Brussels: is PHA a naturally occurring polymer? Or a plastic?

Düsseldorf, Germany — With the formal adoption of the single-use plastics directive by the European Council in May, the ax officially fell for the producers of disposable products such as plastic plates, cutlery, straws, balloon sticks and cotton buds. 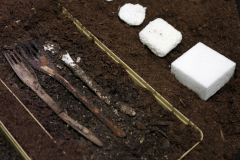 As from 2021, these products will be banned; they will no longer be permitted to be produced from "plastic," as defined by the directive. The directive is highly specific: Naturally occurring polymers that have not been chemically modified are exempt from the new rules, while plastics manufactured from modified natural polymers, or from bio-based, fossil or synthetic feedstocks, were not.

So where does that leave the family of polyhydroxyalkanoate bioplastics, known as PHA? Are PHAs naturally occurring polymers? Or are they simply bio-based plastic?

For manufacturers of the banned single-use plastics items who are looking at PHA as a possible alternative, the difference can be crucial to the future of their business.

For example, Hoogstraten, Belgium-based airline cutlery producer deSter Corp. is experimenting with PHA for disposable foodservice and tableware products. Yet officials still have no idea whether PHAs will ultimately be considered to be a polymer or a plastic.

"We'd like to switch to PHA immediately," said Pieter Willot, sustainability manager at deSter. "But the jury in Brussels is still out on this."

"PHA is a family of bio-benign materials that have been part of nature for millions of years. So is it a natural material? From my perspective, it certainly is," said Jan Ravenstijn, a global consultant on bio-based materials.

PHAs are biodegradable, compostable thermoplastics, produced by microbial fermentation of carbon-based feedstocks. The properties of PHA polymers are tunable and dependent on the specific combinations of different monomers in the polymer chain.

"The question is whether fermentation is considered natural or not," Willot said. "However, I've seen reports about birds eating berries on bushes that have started to rot — which is a fermentation process — and becoming drunk. I'd say that was natural."

DeSter's experiments with PHA yielded some surprising insights. Because no one could tell it was a natural polymer — "it looked too much like plastic," Willot said — the company added natural fiber, which had the added advantage of bringing the cost down.

PHA, he added, is three to four times as expensive as conventional plastics, so the price must come down and "we need to work on clearer material availability prospects."

"But, above all, there is still a need for clarity about the status of PHAs within the single-use plastics framework," Willot said.

As the discussion about PHA becomes increasingly urgent, interest in the material has grown.

"The accessible market for PHA is huge," Ravenstijn said. However, the PHA platform is currently embryonic, he added. It is not yet available in the volumes required in the case of a wholesale switch for single-use plastic products.

A nonprofit, cross-value chain called GO!PHA launched last year to raise awareness about the material globally. It is backed by more than 25 leading industrial and academic members. And a group of internationally respected polymers scientists from around the world have joined together and offered a written recommendation on exempting PHA materials from the single-use plastics directive.

"PHA is truly circular," said Anindya Mukherjee, of i2i consulting and cofounder of GO!PHA. "And it gives us another end-of-life option."

"We have the data on its biodegradation behavior. We have the certifications. But we need an exempt situation for PHA polymers under the new directive. We are hoping Brussels will listen to the scientific opinions," Ravenstijn said. "Plus, we are pushing hard for the exemption. And we don't think it's an 'if,' but a 'when.'

"We expect a verdict by the end of this year."

This article first appeared on 22 October 2019 in the K show daily published by Plastics News/Plastics News Europe/PRW and is reproduced here with permission.