Fredahl Rydéns, the largest supplier of funeral products in the Nordic countries has launched a burial coffin made from a biocomposite called OrganoComp. Using only 50% of the amount of raw material normally needed, the weight of the ‘Saga’ coffin is half the weight - 20kg instead of 40kg – of a traditional coffin. 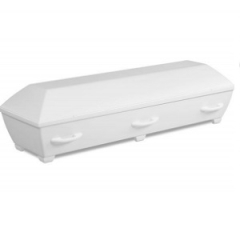 The Saga, introduced to the funeral industry on May 10, is the culmination of a development process that started 10 years ago. Sweden-based OrganoClick, a green chemical technology company that invented and patented a technology to modify biofibres, started to develop a new biocomposite based on modified cellulose fibres, wheat bran, and biopolymers from food waste such as orange peels and shrimp shells.

The company’s proprietary fibre modification technology enabled properties such as fire resistance, strength and water repellency to be added to the material, if desired. The biocomposite is suitable for the replacement of hard plastics such as polypropylene, or particle boards which contains large amounts of synthetic glue.

The company has also developed a new technology to produce large products from the biocomposite, such as coffins. Inspired by the production process for moulded pulp, used for applications such as packaging, a 3D moulding process was successfully developed enabling the highly automated production of large, complex, 3D-shaped products. The Saga coffin is produced in only two pieces (lid and bottom), before being assembled to a final coffin.

OrganoClick’s biocomposites are based on biomimicry research conducted at Stockholm University and the Swedish University of Agricultural Sciences, according to Mårten Hellberg, CEO and co-founder of OrganoClick. “By mimicking nature’s own chemistry, and combine this with our unique fibre moulding technology, we have developed strong and durable materials which can be used in such demanding products as burial coffins with high requirements on quality and surface smoothness,” he said

Another application using OrganoComp is that of a sound absorbing acoustic panel, launched by Baux, a leading supplier of acoustic products. New applications in the pipeline include a risk waste container used in hospitals, where OrganoComp is replacing polypropylene. Other future applications of OrganoComp include furniture, interior design and speciality packages.
Serial production of the Saga and the acoustic panel will now start at OrganoClick’s factory north of Stockholm. The first production line has a production capacity of 50,000 burial coffins per year.