A team from the Fraunhofer Institute for Production Engineering and Automation (IPA), working closely with Tecnaro, a producer of renewably sourced raw materials and Dambeck, a supplier of orthopaedic prostheses, investigated the use of biobased materials for making orthoses and prostheses. 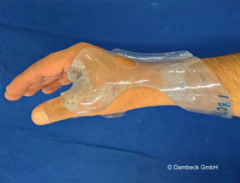 Suitable biopolymer compounds were developed, which were used to produce and test functional models. A bio-based knee prosthesis successfully passed the endurance test in accordance with ISO 10328.

Tecnaro was responsible for the material selection - biopolymers, natural fibers and additives – and for the development of the new compounds based on these. Particular attention was paid to the processability of the material in the plate extrusion process, in view of later industrial production. The Fraunhofer IPA and orthopaedic technology company Dambeck produced various orthoses and prostheses from the selected materials, which were then extensively tested. A particularly promising product was so-called all-terrain knee prosthesis (AT knee) produced through injection molding, a version of which is already on the market but then made from conventional plastics. The researchers produced two biobased compound variants - with a biobased content of 72 and 100 percent, respectively - and successfully tested them in accordance with ISO 10328 in the endurance test with 3 million loading cycles.

Another technology investigated during the project was 3D printing. In the past, the IPA had already successfully 3 D-printed a Niagara foot prosthesis, including a cosmetic cover (replica of the body shape). The researchers had also developed the required soft bioplastic in the project. Mechanical tests with the 3D printing model could not be performed during the project period, but the researchers consider this production process to be particularly interesting.

Many new, biobased materials have resulted from the project, including transparent, heat-stable, almost splinter-free or 3D-printable materials. High-modulus materials for high-dimensional stability requirements, as well as soft materials suitable for children's toys have also been developed. All compounds have a good melting behavior, the viscosities can be adjusted within the parameters typical for polymer melts, and they have been tested for safety in contact with the human body. The developed materials thus meet all the requirements for mass production of orthotic and prosthetic components or other new products. The project partners are happy to provide interested parties with material samples.

The project was funded by the Federal Ministry of Food and Agriculture (BMEL) through the project agency Fachagentur Nachwachsende Rohstoffe e. V. (FNR). The final reports are available on fnr.de under the grant marks 22022012, 22016014 and 22015914.