A recent market study on the agricultural film market has yielded a number of interesting insights. The study, entitled “Agricultural Films Market Forecast, Trend Analysis & Competition Tracking – Global Market Insights 2018 to 2028” forecasts a year-on-year growth in 2019 of more than 5% over 2018.

Gains in the agricultural films industry are influenced by numerous factors, ranging from the development of biodegradable and eco-friendly alternatives, to introduction of affordable machines for fast yet efficient laying down of films on a large scale. 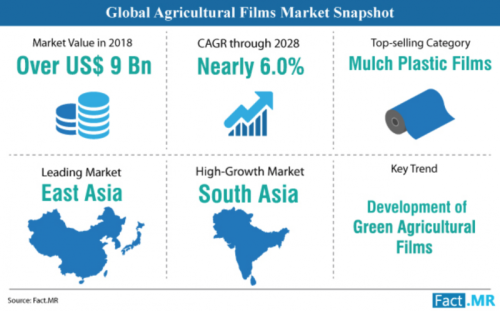 Mulch films are the preferred type of agricultural film in the market, the study found, with sales in 2019 estimated at over 2200 tons. This popularity is due to the unparalleled effectiveness of this type of film in increasing farmland yield. In addition, mulch plastic films have gained widespread acceptance among farmers worldwide, as their use contributes to the creation of favorable microclimatic conditions for accelerating the growth of crops.

An exponential growth in food demand over the coming years will remain the leading factor influencing the sales r of agricultural films. According to the Food and Agriculture Organization (FAO), the demand for food is estimated to increase by 70% by 2050.

Mulch plastic films, on account of their unmatched benefits and effectiveness in increasing the agricultural productivity, will continue to witness robust demand, in line with the surging food demand in the foreseeable future. Mulch plastic films complement the use of drip irrigation and polymer-based fertilizer release practices, enabling easy and time-effective production of high-quality agricultural produce.

Seeking to reduce the environmental impact of the use of agricultural films and to respond to the burgeoning demand for eco-friendly products, manufacturers in the agricultural films market are turning their attention to, among other things, biodegradable alternatives to polyethylene. As technological developments in this area advance, lucrative opportunities are imminent for players in the agricultural films market. A recent study from ETH Zurich concluded that PBAT (polybutylene adipate terephthalate) could offer a cost-effective solution.
According to the ETH Zurich study, PBAT will undergo complete biodegradation in soil over a period of six weeks, which makes it an ideal replacement for polyethylene.

Additionally, accelerating development of novel recycling processes and their conversion into goods reusable in agricultural applications, are expected to augur well for growth of the agriculture film market.

The study also noted that the trend towards more organic farming practices could negatively affect the growth of the market for agricultural sales, as when farming according to these practices, the use of synthetic substances are avoided wherever possible. ,

These insights are based on a report on Agricultural Films Market by Fact.MR