Newest market and trend report: 2018 was a very good year for bio-based polymers

Nova-Institute’s latest market and trend report came out earlier this month. Entitles “Bio-based Building Blocks and Polymers – Global Capacities, Production and Trends 2018-2023”, it shows the production capacities and, for the first time, the production data for all bio-based polymers.

According to this report, the total production volume reached 7.5 million tonnes in 2018, which equates to about 2% of the production volume of petrochemical polymers. The potential of these materials is much higher, the authors note, but the low price of oil combined with the lack of political support are factors working against their reaching significant growth.

The biobased industry has, however, grown more professional and differentiated over the years. Today, there is a bio-based alternative for practically every application and production capacities and volumes are predicted to continue to show a CAGR of about 4% through 2023, almost the same rate as that projected for petrochemical polymers and continue to hover at around 2% throughout the forecast period. (Figure 1). 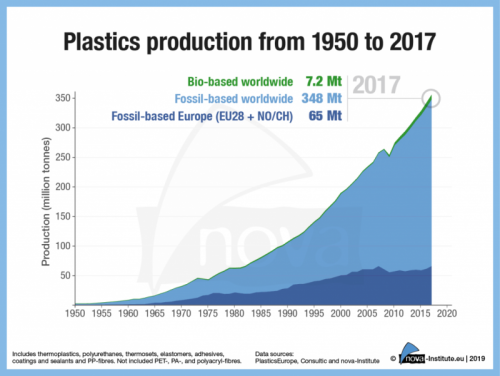 The main reason for the rise in production capacity is the new Total Corbion PLA production facility in Thailand which came on stream in 2018 and the added production capacity of polytrimethylene terephthalate (PTT) and starch blends in the US. Both PLA and starch blends will continue to grow significantly until 2023.
Furthermore, biobased production capacity will expand during the forecast period for bio-based polyamides, polyethylene (PE) while the production of polypropylene (PP) and poly(butylene adipate-co-terephthalate) (PBAT) will commence. PEF - polyethylene furanoate - which seemed so promising (PEF) will not be produced at commercial scale until after 2023.

The second advantage relates to the end of life: around a quarter of the biobased polymers produced are biodegradable (depending on the environment) and could therefore offer a solution in the case of plastics that are unable to be collected for recycling. Only a few countries such as Italy, France and, in future probably Spain will politically support this additional disposal route.

Growth drivers
The most important market drivers in 2018 were brands that wanted to offer their customers environmentally friendly solutions and critical consumers looking for alternatives to petrochemicals. If bio-based polymers were to be accepted as a solution and promoted similarly to the way biofuels are, annual growth rates of 10 to 20% could be expected. The same applies in respect of the oil price. Based on the existing technical maturity of bio-based polymers, considerable market share could then be gained.

A total of 17 bio-based building blocks and 16 polymers are covered in the report. In addition, the new issue includes analyses of market developments and producers per building block and polymer, so that readers can quickly gain an overview of developments that go far beyond capacity and production figures. A collaboration with experts in the area made it possible, for the first time, to compile a detailed study, calculation and explanation of the market development of cellulose acetate (CA), bio-based epoxy resins and bio-based polyurethanes . The deep dive into the producing companies was comprehensively updated and shows now 175 detailed company profiles – from start-ups to multinational corporations.

Figure 2 shows all commercially realized pathways from biomass via different building blocks and monomers to bio-based polymers. As in previous years, we have added several pathways and some new intermediates. 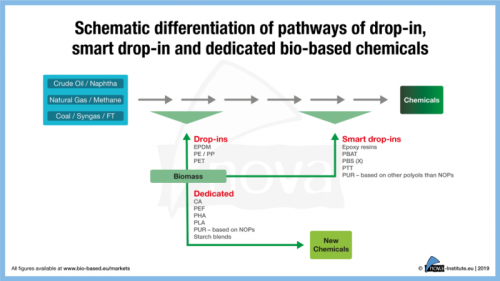 Figure 3 shows the different pathways of bio-based “drop-in”, “smart drop-in” and “dedicated” inputs within the chemical production chain. For each group certain bio-based polymers are exemplarily shown. The different bio-based polymer groups are subject to different market dynamics. While the drop-ins have direct petrochemical counterparts and can substitute them, the dedicated ones have new properties and functionalities that petrochemistry does not provide. Both have their own advantages and disadvantages from a production and market perspective. 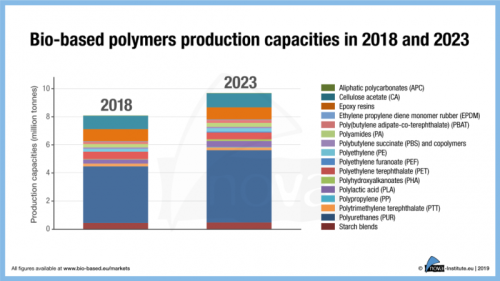 Figure 4 summarises the results of the 380-pages report and shows the development of capacities from 2018 to 2023 on the basis of forecasts by current and some additional producers. Here an increase is shown from 8 Mio. tonnes production capacity in 2018 to 9.6 Mio. tonnes in 2023, which means an expected yearly growth rate of about 4% (CAGR). With an expected CAGR of 10% between 2018 and 2023, Europe will display the highest growth of bio-based polymer capacities compared to other regions of the world (see Figure 7).

If only the new dedicated polymers (for definition see Figure 3) are considered, the growth rates are expected to be even higher (CAGR = 5%), as Figure 5 shows. In the group of dedicated bio-based polymers, price pressure stemming from cheap crude oil is lower than for other groups because there are no direct petrochemical counterparts.

Figure 6 illustrates the development of capacities for the main bio-based building blocks, the core of the new bioeconomy, used for the production of polymers. Between 2018 and 2023, the CAGR of 4.5% will be only slightly higher than that of bio-based polymers (4%) as a whole. The building blocks can be used in structural polymers as well as in functional polymers (for definition see below) and also in various other applications such as food, feed, cosmetics or pharmaceuticals.

The overall production capacity of bio-based building blocks increased by about 5% (120,000 t/a) in 2018, although some pioneers went bankrupt. The overall forecast for bio-based building blocks evolution worldwide indicates a total growth by 4.5% until 2023 with 1,3-propanediol (1,3-PDO), 1,4-butanediol (1,4-BDO), 1,5-pentamethylenediamine (DN5) and 2,5-furandicarboxylic acid (2,5-FDCA) / furan dicarboxylic methyl ester (FDME) being the main drivers.
Global production capacities of bio-based polymers by region
Besides the leading Asian region which has installed the largest bio-based production capacities worldwide with 53% in 2018, Europe follows with 18% and North and South America with 17% respectively 11%. In the next five years, the share of Europe will rise to 25% until 2023 – all other regions will face decreasing shares (see Figure 7).

This increase is mainly due to the dedicated bio-based polymers PEF, PHA, PLA and starch blends as well as the new established bio-based production capacity of PP, the increase in PE capacity and an increase in polyamides and PBAT.
This shows that the substantial investment in research and development in Europe is bearing fruit. Now, if the political framework were designed more favourably, the bioeconomy in Europe could really flourish. Technology and business are ready. 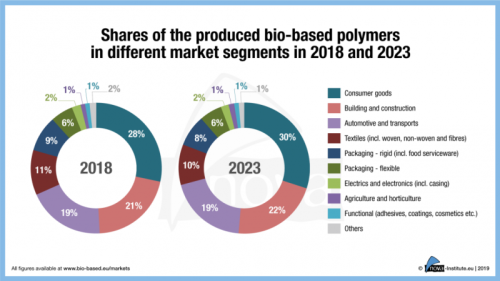 Today, bio-based polymers can be used in almost all market segments and applications, but the applications per polymer are very different. Figure 8 shows a summary of the applications for all polymers.
Consumer goods make up the largest share of actually produced bio-based polymers with 28% in 2018 (mainly PUR, epoxy resins and PA), followed by the building and construction sector (epoxy resins, PA, PUR) with 21%, the automotive and transport sector with 19% (epoxy resins, PA, PUR) and the packaging (flexible and rigid) (PLA, PBAT, PE, PET, starch blends) with 15%, as well as textiles (wovens and non-wovens) (CA, PA, PLA, PTT) with 11%. For 2023, no significant changes are expected with regard to market application shares.