Survey explores status of the national bioeconomy efforts within the

The Joint Research Centre (JRC), the International Energy Agency (IEA) Bioenergy and the Bio-based Industries Joint Undertaking (BBI JU), have joined forces to launch a survey to understand the status regarding the policies and strategies and other activities designed to promote the transition to the bioeconomy which have been taken at by the various states at national level. 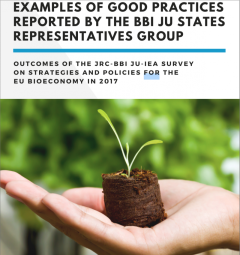 Twenty-one members of the States Representatives Group, an advisory body of the BBI JU, contributed to the survey in 2017. The BBI JU has now compiled the outcome of the survey in the present report. Together with the information published in the Bioeconomy Knowledge Centre, this BBI JU publication provides an overview of the status of policies and strategies to support the bio-based industrial sector at the national level during 2017. It provides examples of good practices and lessons learnt as reported by the SRG to support the deployment of the BBI JU and enhance its impact at national level. These examples are intended for use by those countries, which are currently less represented in BBI JU, and/or countries that do not have the appropriate mechanisms in place at the national level to deploy the bio-based industrial sector.