The UK has an opportunity to lead the way in tackling global plastic waste by becoming a world leader in bioplastics, according to a new report titled Bio-based & Biodegradable Plastic in the UK. 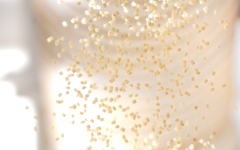 The report by bioeconomy consultants NNFCC concludes that recycling alone is insufficient, and bioplastics – plastics made from plants instead of oil, many of which are biodegradable - are crucial to addressing the waste problem. It also shows that solving this global problem represents a significant economic opportunity for the UK.

Plastics have many advantages – they are lightweight, durable and easy to shape – so are critical to industries from packaging to cars and planes. But they come at huge environmental cost: requiring 3.5 million tonnes of oil every year for production in the UK, taking centuries to decompose, creating landfill, polluting oceans and blighting landscapes.

Recycling is widely advocated as the solution, but the report highlights the limits of this approach. Although most plastics can be recycled in theory, the majority are not. Some 50% of plastic packaging items don’t have viable recycling pathways[1]. Food packaging needs to be cleaned before recycling which is often not possible (street food, music festivals, etc). Despite best efforts to promote recycling, plastic continues to enter and damage natural and marine environments.

The report also rejects calls for an outright plastics ban, which would see them replaced with traditional materials such as glass. It cites calculations that replacing plastic with such materials would increase EU greenhouse gas emissions by 61%, largely due to costs of transporting more weight.

It concludes that a shift to plastics produced from renewable materials and designed to be biodegradable, would address the environmental problems with plastics while retaining their benefits.

A global solution driven by a UK economic opportunity

The report argues that the UK is well placed to lead the way in developing bioplastics to alleviate this pressing challenge. It also shows that it is strongly in its economic interests to do so. With the right support from government and industry, bioplastics could create 34,000 jobs and contribute £1.92 billion to the UK economy in the next decade[2].

The UK has a captive market. It is the fourth largest consumer of plastics in Europe, and a major plastics exporter, with many of its customers already demanding alternatives.

It also has the skills to innovate in bioplastics thanks to a decade of investment in its world leading universities and companies at the cutting edge of biotechnology. The plastics industry is a major UK employer – skills and capabilities that easily transfer to bioplastics production.

Further, the report is clear that the UK has sufficient waste biomass from agriculture to sustain a thriving bioplastics industry.

Adrian Higson, Lead Consultant Bio-based Products, at NNFCC says: “Bio-based plastics are far less carbon-intensive than oil-based plastics. Because they are produced from plants that have sequestered atmospheric carbon dioxide during their growth, they can help reduce CO2 emissions associated with oil-based plastics.

“With the right investment in scaleup facilities, the UK could be the world leader in plastics, only this time it would export sustainable, biodegradable plastics, that help alleviate plastic waste.

“Bio-based plastics are ripe for innovation. If the UK doesn’t capitalise on the opportunity, UK manufacturers will become reliant on foreign imports for bioplastics.”

Thanks to investment in research, many bioplastics now have comparable functionality to oil-derived plastics. To turn innovative ideas into sustainable solutions, the report asserts that UK government support is needed for the transition of the UK’s ground-breaking R&D into industrial scale production. This includes effective policy, new open access production scale-up facilities, and support to attract private investment in bioplastics. This makes bioplastics cost-competitive and therefore encourage the adoption of greener alternatives.

This has many economic and environmental advantages: reducing plastic waste in oceans and the natural environment, reduction of CO2 emissions associated with oil- based plastics, growth of a globally important industry in the UK, and job creation in Britain’s industrial heartland. The UK already aims to achieve zero avoidable plastic waste by the end of 2042, bioplastics are crucial in achieving this.

Paul Mines, CEO of Biome Bioplastics, a UK company developing ‘intelligent, natural plastics’, was consulted in the development of the report.
“Reducing plastic waste is a global imperative and it’s encouraging that demand for cleaner alternatives is now being driven by the public, thanks to widespread publicity in popular media about the damaging impact of plastics on the environment,” he said. “The UK is well placed to meet this demand given that it is a world leader in bioplastics research and early stage demonstrations. If government and industry collaborate effectively, this has the potential to scale to meet industrial level demand.”