Recently, on January 24th of this year, Novamont met with the municipal board of Gornji Milanovac, a city located in Central Serbia, to open talks about European policies with a bearing on the circular economy. 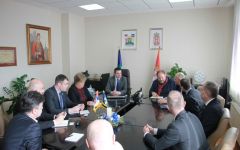 During the meeting, Novamont presented its circular bioeconomy model and the Italian system of collection, disposal and valorisation of organic waste, which, through composting, can be transformed into a valuable resource for soil fertility.

The Serbian Chamber of Commerce is seeking to create a pilot project in the city of Gornji Milanovac, in which new technologies (from bioplastics production and conversion to composting plants) would be incorporated and implemented. The idea is the best way to do so would be by establishing new public-private partnerships with local and foreign companies.

According to the Secretary of the Plastics Section of the Chamber of Commerce, the project is aimed, among other things, at generating a circular economy case study in Serbia.

During the meeting, the representatives of Novamont and the Chamber of Commerce were also given the opportunity to visit two production companies in Gornji Milanovac: the first, a producer of colors and raw materials for plastics; the second was one of the major producers of plastic shopping bags in Serbia.