In a study, published in the journal Metabolic Engineering, Taylor Weiss (a former post-doc in the Laboratory of Dr. Danny Ducat at Michigan State University (Ducat Lab) and the Ducat lab propose a new production method, powered by sunlight and an ancient microorganism, that could significantly cut costs. 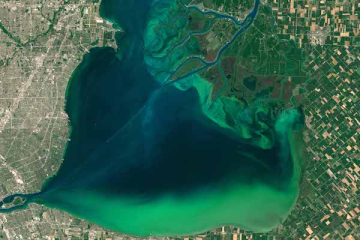 Cyanobacteria are abundant on Earth and can thrive in many areas which are hostile to plants, like this bloom on Lake Erie.
By NASA/Public Domain.

Cyanos: micro powerhouses
“Present bioplastic production relies on feeding plastic-producing bacteria with large quantities of sugars from crops, like corn or sugarcane,” Taylor says. “But these crops also feed people and animals, so we risk competing for limited agricultural resources and driving food prices up in the long term.”
A promising alternative is working with cyanobacteria, microorganisms that harness sunlight to produce chemical compounds, through photosynthesis.
Cyanos (for short) thrive in environments hostile to crops, like iceberg walls or the edges of hot springs, minimizing competition for agricultural land.
That's why they're hot in the biotech industry, with scientists wanting to genetically tweak them to create products for human consumption, like electricity, biofuels, even food and oxygen for future manned outposts on Mars!

A bioplastic consortium engineered
There's a catch. Cyanos are great at photosynthesis, but not so much at making bioplastics. Current methods where cyanos do it all - collect the sun’s energy, the carbon, and the create the bioplastic - end up inefficient. 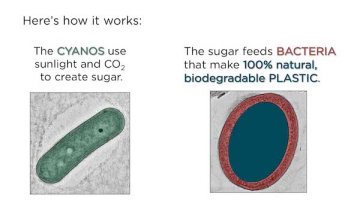 A snapshot of the microorganism cooperative. Cyanos (green) make sugar, which is leaked into a surrounding medium. Special bacteria (red) eat the sugar, which powers bioplastic production (blue).
By Taylor Weiss

So, Taylor and his colleagues thought, why not split the workload with other organisms?
They started out with a cyano strain that naturally produces sugar. They tweaked them to constantly leak the sugar into a surrounding salt water medium.
Then, they paired the cyanos with natural bacteria that make bioplastic. The bacteria fed on the leaked sugar, which is to bacteria what honey is to bears. (For more, see the video.)
Over five months of testing, the pairing turned out prolific and robust:
• Processed biomass contained a near constant 30% bioplastic content, four times more than the best cyano working alone.
• Production rates were over twenty times faster.
The system is also relatively inexpensive to maintain.
“Harvesting bioproducts is a common costly bottleneck,” Taylor adds, “It involves collecting and regrowing microorganisms from scratch, each production cycle. But, we trap our cyanos in a hydrogel bead for reuse after each harvest.”
Also cutting costs was the fact the plastic-producing bacteria thoroughly outcompeted other unwelcome contaminating bacteriatrying to get to the sugar, without the need for human support. 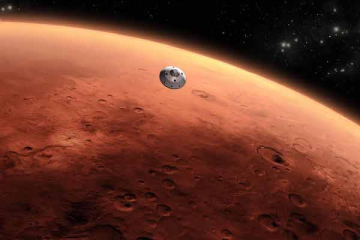 Perhaps we'll use cyanos to someday provide food and oxygen on Martian outposts
By NASA/Public Domain.

From plastic to perfumes and medicines
Taylor's cooperative seems to continuously improve with time, without human meddling.
Working with one organism can be hard, because it typically prioritizes its health and growth over producing for us.
“But this pair has complementary strengths: the cyanos are constantly producing sugar, and the bacteria are constantly beefing up on it, which encourages the cyanos to keep producing.”
Looking ahead, Taylor wants to improve productivity and diversify the bioproduct line.
“We’ve laid the foundation for a “plug-and-play” system where a cyano can be gradually upgraded to produce more sugar. We eventually want to pair it with diverse specialist bacteria to create many cheaper, green bioproducts like fuels, fragrances, dyes, and medicines.”
“Ultimately, we aren’t just creating alternatives to synthetic products. We’re figuring out how to ask Nature to do what it does best: figure out the problem for us.”
________________________________________
This work was primarily funded by the National Science Foundation. The MSU-DOE Plant Research Laboratory also relies on major funding from the US Department of Energy, Office of Science, Basic Energy Sciences.