Genetically engineered microorganisms can produce fluorinated PHA – among other things

Natural organic compounds that contain fluorine are rare because living organisms--with a few exceptions--do not produce them. American scientists have now genetically engineered a microbial host for organofluorine metabolism, allowing it to produce a fluoridated intermediate known as a diketide. 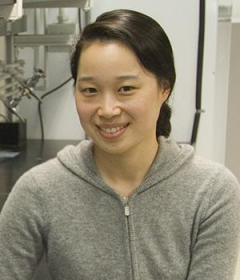 As reported in the journal Angewandte Chemie, the diketide could then be used as a monomer for the in vivo production of fluorinated bioplastics.

Unlike nature, chemists use fluorine often. Teflon coatings for pans and water-repellent Gore-Tex jackets, both based on polytetrafluoroethylene, immediately spring to mind. Fluorine is also found in many agrochemicals, and about 20-30% of modern pharmaceuticals, ranging from antimalarial and cytostatic drugs to inhalation anesthetics, blood substitutes, and liquid ventilation agents. Organofluorine molecules are also used in liquid crystals for displays, as well as ozone-friendly refrigerants and propellants.

Given the potential for living systems to produce highly complex chemical compounds, researchers working with Michelle C.Y. Chang at the University of California, Berkeley (USA), aimed to manipulate the biosynthetic machinery in cells to use simple fluorinated building blocks to make new organofluorine target molecules.

To achieve this, they introduced genes that code for three particularly efficient enzymes from a variety of other microorganisms into the bacterium, Escherichia coli, to construct the diketide biosynthesis pathway. These enzymes are able to use fluorine-containing derivatives of their normal substrates. In addition, it was also necessary to introduce a gene for a transport protein that carries fluoromalonate--as fluorine-containing starting material--into the cell. The enzymes allowed the cells to use the biosynthesis pathway to make fluoromalonyl coenzyme A and convert it to the 2-fluoro-(R)-3-hydroxybutyrate diketide in high yield.

The researchers introduced yet another gene for an enzyme used by many bacteria to make polyhydroxyalkanoates (PHAs), which are polyesters used to store carbon and energy. Biodegradable PHAs are used in the production of bioplastics for applications like food packaging and medical implants. The new, genetically engineered microorganisms incorporated the fluorinated diketides into the PHAs they produced, generating polymers containing 5 to 15 % fluorinated monomers. The fluorinated bioplastics were less brittle than fluorine-free PHAs. Controlled incorporation of fluorinated monomers could allow for targeted variation of the properties of bioplastics.

The researchers also hope to use the key component fluoromalonyl coenzyme A to produce a broad spectrum of small fluorinated molecules in living cells for pharmaceutical applications.