It’s a moment the company has been edging toward ever since it launched its Dream Reaction project back in 2009: the delivery of a novel product based on carbon dioxide.

On Tuesday, the first tanker left the Covestro’s Dormagen site near Cologne, Germany, carrying the new carbon dioxide-based product. The company has now officially started production in the plant it inaugurated in Dormagen this past summer. The plant uses the climate gas to produce a key component for foams used in mattresses and upholstered furniture.

The CO2 serves as a new raw material, replacing a portion of the petroleum on which the precursor is usually based. This contributor to sustainability and pioneering scientific achievement has now commenced industrial production. 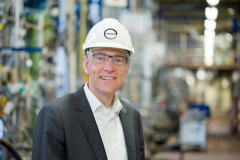 “We have reached another milestone. The plant is running smoothly, and the first shipment of our new flexible foam component made with CO2 is on its way to the customer,” said project manager Dr. Karsten Malsch. “We have been working continuously toward this moment ever since our initial research several years ago. We are thrilled to have reached this point and are using it as motivation to continue our efforts in this area.”

Covestro is working to integrate even more carbon dioxide into its products. In the case of the precursor from the Dormagen plant, a “polyol,” the CO2 content is roughly 20 percent. Other projects have already achieved contents of over 40 percent in the lab. Covestro is also striving to use carbon dioxide for the manufacture of other products besides flexible foam. Potential products that have already been tested in the lab include precursors for rigid foam and elastomers. The company is also willing to license the technology. This would conserve limited petroleum resources throughout the industry while reducing refining, which is energy and emissions intensive.