Researchers at Tuskagee University in Alabama (USA) say they have have discovered a new method that can be used to suspend tiny particles of cellulose in an organic solvent that is commonly used in the plastic industry.

This technique could remove the current limitations and allow for the creation of a new kind of biodegradable cellulose-based plastic, which could be used in the production of items ranging from packaging materials to plastic covers.

To date, there have been limited successes in inventing new solvents to dissolve cellulose for commercialization usage. Also, the increase in toxicity associated with current dissolution techniques has made cellulose less attractive for use in the plastic industry.

Using their new dispersion of cellulose technique, Dr. Michael L. Curry, an Associate Professor in the Department of Chemistry and Associate Adjunct Professor in the Department of Materials Science and Engineering, and his second-year graduate student, Donald H. White, experimented with the development of cellulose-based plastics using both biodegradable and non-biodegradable polymer matrices. Importantly, unlike earlier bio-based plastics, their cellulose-based plastics are flexible and show significant improvements in the storage modulus which demonstrates an increase in the rigidity and strength of the composite material.

According to Curry, given that the global production of plastics will exceed 300 million 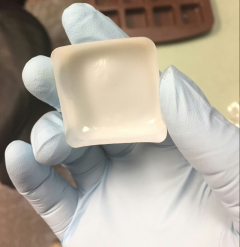 tons annually in the near future and greater than 98 percent of it is made with crude oil and other fossil fuels, this new invention will limit the amount of non-biodegradable plastics ending up in our land fields and oceans, and the amount of carbon dioxide released into the atmosphere by plastics that contribute to global climate change.

“This discovery will allow us to develop new and better plastic products, use plastic resources more efficiently and create products that have a low impact on the environment, thus reducing our ecological footprint,” Curry said.