Sex education is a lot more these days than the simple ‘facts of life’. According to UNESCO, “Comprehensive Sexuality Education is an age-appropriate, culturally relevant approach to teaching about sex and relationships by providing scientifically accurate, realistic, non-judgmental information” – a definition that leaves a lot of leeway when deciding just what that information should comprise. 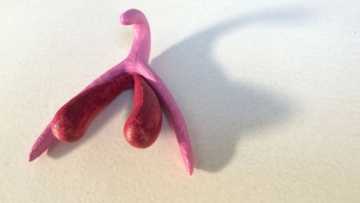 What it almost never includes, however, is a talk about the clitoris. Which means that quite a few people - male and female - are extremely hazy on the precise whereabouts, function and appearance of this female sexual organ. And that, in the view of French sociomedical researcher Odile Fillod, is a clear case of gender inequality.

And it’s not just Fillod who thinks so: in June, Haut Conseil à l’Egalité (High Council for Equality), a government organization dedicated to issues of gender equality, published a report revealing that sex education in France is rife with sexism. For boys, the focus is on “genital sexuality”, while girls “attach more importance to love”, so said the report. In a country with a reputation of for being sexually sophisticated, it was high time for more gender equality in education and the encouragement of sexual empowerment for all French youth.

To that end, Fillod, who had been working with V’idéaux, a Toulouse-based documentary film production company, to create a Ministry of Education-supported website dedicated to the promotion of respect and equality between men and women, decided to 3D print an anatomically correct model of the clitoris.

She had been wrestling for years with the problem that, "among many other sexist biases and errors present in French biology textbooks", the clitoris is often overlooked and is systematically misrepresented whenever it does rate a mention. Fillod has been working on a series of  videos, that, she says on her Facebook page,  "aim at correcting those biases and errors. They will be available in January 2017 on a website which will be called matilda.education, with a lot of other anti-sexist teaching material from various experts working on sex/gender issues."

Fillod developed her 3D model at the Carrefour numérique, the fab lab of the Cité des sciences et de l'industrie in Paris, after which the 3D printed clitoris was then printed out, fittingly enough, in PLA 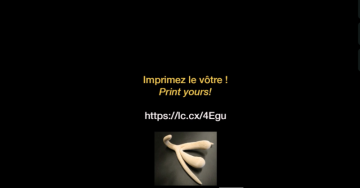 bioplastic. The end product looks startlingly different from how most people picture the clitoris looks. Apparently, there is a lot more to it than meets the eye. For enthousiasts who want to print their own bioplastic organ, the files are open-source, and hence freely available.

As Fillod notes, women and girls are largely uneducated about their own bodies. But:“It’s important that women have a mental image of what is actually happening in their body when they’re stimulated,” she said in an interview with The Guardian. “In understanding the key role of the clitoris, a woman can stop feeling shame, or [that she’s] abnormal if penile-vaginal intercourse doesn’t do the trick for her – given the anatomical data, that is the case for most women.”

In France, the model can be printed and used for sex education in schools, from primary to secondary level, starting in September. Although, as Fillod points out: "Biology teachers, sex educators, or whoever can use it, but I doubt many of them will. As of today, Clitoris is still COMPLETELY ABSENT from French biology curriculum AND official guidelines for sex education."

Still, an opportunity has been created to give children  a tangible, much more accurate representation of the female anatomy than depicted in the majority of school textbooks, which is a start. It may not mean that, even in France, no girl will ever have to be, as Salt 'N' Pepa put it, “mad and sad and feelin' bad/Thinkin' about the things that she never had” again, but at least they'll have a good idea of the best way to go about getting them. And isn't that something to get excited about? (KL)