In Germany alone, millions of tons of plastic waste are generated annually, of which most is incinerated. An innovative project at RWTH Aachen University is currently exploring an innovative approach to plastics recycling: the researchers in the project are coaxing microbes to transform components of crude oil-based plastics into bioplastic. 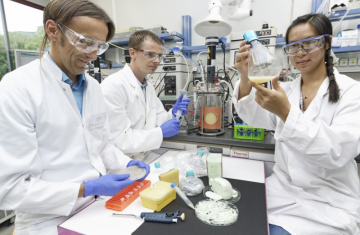 This is the first RWTH-coordinated collaborative project under Horizon 2020, the EU framework program for research and innovation. The project goes by the somewhat unwieldy name of “From Plastic waste to Plastic value using Pseudomonas putida Synthetic Biology” – which was quickly shortened by the University to the more convenient P4SB. Funds for the project, in which the University is collaborating with ten other partners from Germany, Ireland, Spain, France, and Great Britain, were acquired by Professor Lars Blank and Dr. Nick Wierckx from the Chair of Applied Microbiology at RWTH Aachen.

"The EU has strict standards for recycling plastic waste," explains Blank. "By 2020, 50 percent of PET plastic, which is used in beverage bottles for exampe, should be recycled. Currently 30 percent is recycled. And polyurethane or PU foams, which are used in mattresses, car seats, or as insulating material, are to be 70 percent recycled. Under five percent is currently recycled."
He noted that most of this type of waste ends up in incinerators even though it is reusable material – albeit a problematic one – or, in the worst case, in countries without a recycling infrastructure, as litter.

The EU's strict recycling quotas will be able to be met in the long-term if these researchers are successful in turning bacteria into plastic-eating organisms.
"We are facing great challenges, because some processes have only been known till now in individual steps, some only in theory even," emphasized Blank. In the consortium experts will contribute their expertise from the fields of synthetic biology, metabolic engineering, enzymology, chemical engineering, polymer science, and environmental research.

The project involves a number of steps. The first step consist of adding enzymes to plastic waste that has been reduced to small pieces, so that the enzymes can break apart the polymer bonds into monomers and individual building blocks. In the second step, the bacteria eat the monomers to transform them into bioplastic, during which they incorporate certain characteristics. Finally, the bacteria excrete bioplastic building blocks.

The final step is currently still theoretical. The researchers currently use a harvesting procedure that kills the bacteria. However, if the principle is successful in the lab, this would not be necessary, making it possible to iterate steps two and three, reusing the same bacteria.
Blank: "It's not just important to implement the individual steps. We have to join them together and develop the tools do so." The whole process is expected to work on the laboratory scale in four years. It will take an ordinate amount of time however, to develop the process on an industrial scale, where the bacteria eat plastic waste by the ton and transform it into bioplastic.”
Nonetheless, the RWTH researchers are confident that they will come closer to finding a solution in the next few years.(KL)