IKEA SUPPLY AG and Newlight Technologies have announced that they have entered into a supply, collaboration, and technology license agreement that will supply IKEA with AirCarbon from Newlight's commercial-scale production facilities and enable IKEA to produce AirCarbon thermoplastic under a technology license.

Under the agreement, IKEA will purchase 50% of the material from Newlight's 23,000 tonne per year plant in the United States, and subsequently IKEA has exclusive rights in the home furnishings industry to use Newlight's carbon capture technology to convert bio-based greenhouse gases, first from biogas and later from carbon dioxide, into AirCarbon thermoplastics for use in its home furnishing products. Both the companies will work together to identify and select the low cost carbon sources and development of the technology to use a range of renewable substrates, with a long term goal to develop capacities up to 453 KTA or 1 billion pounds per year. The AirCarbon plants are initially intended to run using biogas from landfills as their sole carbon feedstock inputs, with expansion into other AirCarbon feedstocks over time, such as carbon dioxide. 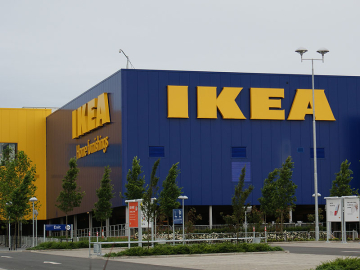 to contribute to a transformational change in the industry and to the development of plastics made from renewable sources. In line with our sustainability goals, we are moving away from virgin fossil based plastic materials in favor of plastic produced from renewable sources such as biogas, sugar wastes, and other renewable carbon sources. We believe our partnership with Newlight has the potential, once fully scaled, to be an important component of our multi-pronged effort to provide IKEA's customers with affordable plastics products made from renewable resources."

Added CEO of Newlight, Mark Herrema: "IKEA's partnership with Newlight marks an important shift in how the world can make materials: from fossil fuels to captured carbon, from consumption to generation, from depletion to restoration. IKEA is a leader in the concept of harnessing its operations to improve the world, and we are proud to be a part of that effort."