One of the highpoints of the two-day European Bioplastics Conference, the annual flagship event for the bioplastics industry in Europe, is the presentation of the annual Global Bioplastics Award, which traditionally takes place at the end of the first day of this conference.

Now in its tenth year, the Global Bioplastics Award recognizes innovation and excellence in the development of bioplastics products, services and processes.

This year again, the standard of entries in the competition was extremely high, leaving the panel of five judges with hard decisions. Yet in the end, one clear winner emerged from the shortlist of strong contenders. Mitsubishi Chemical and Sharp Corporation, both of Japan, were jointly presented with the 2015 Global Bioplastics Award in recognition of Sharp’s use of Mitsubishi’s biobased engineering plastic DURABIO™ for the front panel of its new smartphone. The judges were especially impressed by the fact that this was a world first: the first instance of a biobased engineering plastic successfully replacing polycarbonate in a technical application.

Durabio is a high-performance, high-transparency bio-based engineering plastic, based on isosorbide as a comonomer that replaces bisphenol A. Isosorbide is derived from glucose, widely available as a biological feedstock. The material features optical properties that are superior to conventional PC and high resistance to cracking, heat and humidity.

Calling it a “promising material” for “challenging applications”, and a “cool product “, 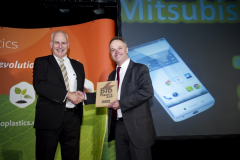 Michael Thielen, editor of bioplasicsMAGAZINE, said the development represented a significant step for the use of biobased engineering plastics. Thielen also announced a first of his own: this year, the trophy presented to the winner of the Award was 3D printed using biobased materials only, thanks to the PLA/PHA specialty filaments provided by Venlo-based colorFABB.(KL)