On October 22, 2015, at Oerlemans Plastics in Genderen, the Netherlands, three water authorities and partners proudly displayed a world first: a kilo of PHA produced by sewage bacteria. 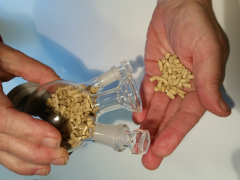 PHA is a fully biodegradable plastic that, under normal conditions, will degrade within a relatively short period of time. Sludge, the residual product remaining after wastewater treatment, can thus be converted into a sustainable product. The pilot project, called PHARIO, demonstrates that it is possible to use sludge as a source for new, sustainable materials. The pilot is taking place at the wastewater treatment plant at Bath, located in Zeeland, the Netherlands.

PHA is made by bacteria as an energy storage medium (in mammals, this is the function of fat). Until now, bacteria were cultivated for PHA production purposes, which requires money and resources. The bacteria used at wastewater treatment plants can also accumulate PHA, and are abundantly available. The idea was, why not use these bacteria instead of specially cultivated strains? After all, this would provide a far less expensive, more sustainable solution.

While production is thus far on a small scale only, this makes it no less of an innovative development, as worldwide, it is the first time this has been successfully achieved. However, as the pilot shows, clearly it is possible.

The pilot project is a joint initiative of three the Dutch water authorities Brabantse Delta, De Dommel and Wetterskip Fryslân, in collaboration with STOWA (Dutch Foundation for Applied Water Research), sludge treatment plant SNB, and two commercial parties, Veolia and KNN. The partners in the project all contributed to the funding; in addition, the project was awarded a grant from the TKI Biobased Economy innovation program. The project is one of the most promising to come out of the “Green Deal” concluded in the Netherlands last year between the Dutch Water Authorities and the government.

Hennie Roorda, member of the board of the Dutch Water Authorities called this development a “fundamental transition”. “This is the only way to describe the transition currently ongoing within the water authorities. By converting sewage into clean materials, sustainable energy and viable water, the water authorities are functioning as an important link in closing chains and cycles towards a sustainable society,” she said.

While current production capacity is small – a few kilos per week – the idea is to scale this up to include the total treated wastewater volume and ultimately resulting in a production capacity of 2000 metric tons/year. The first kilo of sewage-based PHA was presented to Oerlemans Packaging director Joan Hanegraaf, whose company processes 600 tons of PHA per year. (KL) 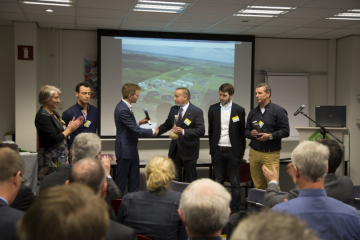