Pentagon staffs have taken many steps to shrink the 6.5-million-square-foot building’s environmental footprint.

Their efforts include finding an environmentally responsible approach to manage the footprints of the employees and 100,000 annual visitors who enter the world’s largest low-rise office building that serves as the headquarters of the U.S. Department of Defense.

In 2010, Pentagon staff conducted a demonstration for entry mats that could meet a three-fold test: performance, sustainability and cost effectiveness. That trial blazed the path to scaling up across the building that is now home to 108 soy-backed entry mats. 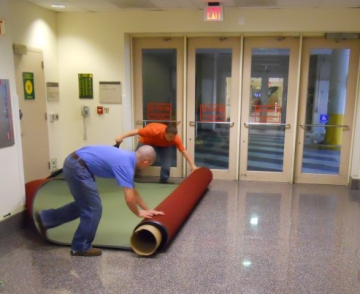 After the 2010 pilot, the Pentagon contracted with EcoPath in 2011 to replace 82 mats at various entrances with new ones made with soy backing. These new mats performed so well that when it came time to replace the original 82 mats, the Pentagon contracted with Signature Accord to again purchase the EcoPath soy-backed mats. The Pentagon recycled the old mats, and added the soy-backed mats to 26 new locations in the building.

The Pentagon began the 2010 pilot test of a new entryway mat made by EcoPath at one of their main entrances (the Metro Entrance Facility). EcoPath are made with a soy-based backing called EnviroCel manufactured by Signature Accord. EnviroCelT uses soy-based polyol technology developed with support from the United Soybean Board (USB). Based on UL third-party verification, soybean oil displaces 60 percent of the petroleum-based polyol in EnviroCel.

USB, the soybean checkoff overseen by the U.S. Department of Agriculture, brought the EcoPath mats to the attention of the Pentagon Environmental Office (PEO) and the Pentagon Building Management Office (PBMO). PBMO had identified performance issues with the mats being used in the building and agreed to work with PEO and USB to test the new mats. The old mats often curled around the edges and frequently moved out of place. With EcoPath mats, the Pentagon’s experience was that the mats do not curl and are less likely to move. Staff report that they have had no trips or falls since the mats were installed, plus they have the added benefit of being made from environmentally preferable materials.

The mats are a cost-effective solution to the heavy pedestrian traffic needs of the Pentagon. Each day, approximately 24,000 people enter and leave the Pentagon. Prior to installation of the EcoPath mats, the Pentagon “rented” mats that were removed for cleaning and replaced every two weeks. Because the mats with the biobased backing lasted for years, they provided a cost-effective choice.

By procuring the new mats, the Pentagon found a foot traffic solution that helped shrink the buildings environmental footprint.(KL)