When BioInspiration, an organic materials company based in Eberswalde, Greater-Berlin, Germany, first began exploring the market opportunities for renewably-sourced materials, one area especially stood out – that of filaments for 3D printing.

Flexible filaments had been seen as an area of opportunity since shortly after the advent of 3D printing technology itself. And already, numerous flexible filaments were available on the market. BioInspiration discovered, however, that what did not exist was a material that was both flexible and made from compostable raw materials – a need the company sought to fulfill.
The result is WillowFlex, a new flexible filament for 3D printers that offers unmatched superior performance with greater temperature resistance, better adhesion and faster printing speeds. The filament is made with a bioplastic called Terratek® Flex, a compostable elastomeric bioplastic made by Green Dot (Cottonwood Falls, KS). 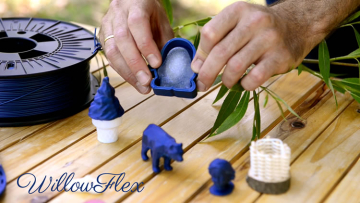 BioInspiration prides itself on identifying materials that “follow nature's lead”, i.e. are compostable, upcyclable, harmless, innovative and resilient. In the course of the search for a material that could meet these requirements, BioInspiration learned about Terratek® Flex, Green Dot's compostable elastomeric bioplastic. It was a good fit: Green Dot had already been experimenting with ways to put their plastic into 3D Printing for a number of years.

“When BioInspiration approached us, ready to take the reins on developing a 3D print form of our materials we moved forward immediately. This brings together two merging branches of Plastic Development – next generation bioplastics and 3D Print integration” said Green Dot CEO, Mark Remmert.

In collaboration with 3dk.berlin, a plastic manufacturer with 30 years’ experience, the companies developed WillowFlex, a flexible 3D printer filament made from compostable raw materials.

WillowFlex offers makers and the decentralized production community a filament that is not just greener, but also offers unique physical properties unmatched by other flexible filaments currently available. As BioInspiration CEO Brian Crotty explained, "We see over and over that nature has a way of surprising us. When we began experimenting with WillowFlex, we found that as a bioplastic filament, it had several advantages inherent to the material."

The material maintains structural integrity at temperatures above 212°F (100°C) and maintains flexibility at temperatures as low as 5°F (-15°C). WillowFlex has excellent layer adhesion and can also be printed at higher speeds, allowing for faster part production. Florian Deurer, who works in the filament laboratory at 3dk.berlin was immediately impressed with the material. "It's totally uncommon for a plastic to be this flexible, this heat resistant and to also have a melting point that is that low that you can print it at temperatures uncommon for other plastics," he said. "That's what's very interesting about this material."

BioInspiration is introducing their ground-breaking filament with a KickStarter campaign. The campaign has another 12 days to run, but the company’s funding goal has already been more than met. BioInspiration plans to have the filament commercially available in late fall 2015.

Green Dot has published a case study about the of development of WillowFlex on their website at www.GreenDotPure.com. They study details how the U.S. and German companies collaborated to develop this unique flexible filament. "This brings together two merging branches of plastic development, next generation bioplastics and 3D print integration," explained Mark Remmert.(KL)