PELAGONIA is a European seeds-to-products and energy value chain for sustainable bioplastics, energy and feeds. DuPont process technology will be deployed to produce 100 million litres of the world’s most sustainable cellulosic bioethanol, suitable for biochemicals, bioplastics and biofuel.

PELAGONIA is a European seeds to products and energy value chain for sustainable bioplastics, energy and feeds.

Half a million tons annually of non-food sorghum, switchgrass and other crops will be farmed on 200 km2 of abandoned and degraded land in EU candidate state Macedonia, and yield-increasing collaboration with local farmers on their own land will result in better food, feed and biofeedstock production.

DuPont process technology will be deployed to produce 100 million litres of the world’s most sustainable cellulosic bioethanol, suitable for biochemicals, bioplastics and biofuel.

Pelagonia is led by Ethanol Europe Renewables Ltd, DuPont, NexSteppe, the Government of Macedonia and the Municipality of Prilep, with the support of the wider EU biobased industry ecosystem.

In the period 2015-‘20 Pelagonia will draw in hundreds of millions of euro of foreign direct investment and loan and equity finance from international sources. Ethanol Europe is funded by USA and Ireland biorefinery investor families Fagen and Turley while OPIC and Cordiant lead their loan finance packages. Pelagonia has applied for a funding contribution under the EU’s 2014-20 innovation programmes which, if granted, will help mobilise around half a billion euro of investments in a tightly integrated European biobased value chain. 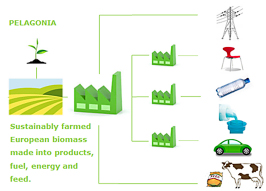 Pelagonia’s managers are unique in their ability to coordinate billions of euros of non-recourse loans for such projects while the technology and engineering involved, though state of the art, are comfortably within the partners’ capabilities.

Pelagonia will drive large scale transfer of key technologies from outside Europe – from seed development to precision farming to ethanologen fermentation to bioplastics production – and drive the growth of a self-contained European industrial biomanufacturing base. Plant construction should start in 2016 and last two years.

“We believe the Macedonian Cellulosic Project can reassert Europe’s leadership in the bioeconomy,” said Eric Sievers, CEO, Ethanol Europe, at the signing of the MoU with the Government of Macedonia on October 16, 2014.

Mr. Sievers will be speaking at the 9th European Bioplastics Conference in Brussels on December 2/3 2015. (MT)