Mulching is a process that typically involves covering the soil with a plastic, non-biodegradable film, which can be harmful to the environment both during and after the crop cycle as it often contains pesticides as well as soil and crop residues. The Agrobiofilm® protective biodegradable film is different as it helps eradicate these environmental problems.

“Our biodegradable mulch films are a credible alternative to conventional fossil non-compostable plastic films,” says AGROBIOFILM project coordinator, Paulo Azevedo of Silvex, Indústria de Plásticos e Papéis, in Portugal. “One of the immediate advantages of using these biodegradable films is that they can be buried directly into the soil, which means that no plastic film removal from the field is required at the end of the crop cycle,” he adds.

The project team developed and tested mulch films that had to be environmentally friendly; compliant
with common farming methods; as well as match and, in some cases, even improve crop yield over conventional plastic films.
Specifically, the team devised the so-called “Mater-Bi® formula”, which contains renewable feedstocks and involves biodegradable materials being decomposed into the soil by microorganisms such as bacteria, fungi and algae.

The project findings show that Agrobiofilm® may be a viable substitute for conventional mulch. The protective covering maintains and even increases the crop yield compared to traditional mulches and is an effective weed deterrent. At the end of the crop cycle, the film can be buried into the soil, avoiding additional costs to remove it from the field – typically an expensive operation due to high labour costs. In addition, results show that after being buried into the soil, over 70% of the mulch decomposes within 160 days.

The marketing effort has already begun in Portugal, Spain and France and the next step for the project team is to launch Agrobiofilm® on the global market. “Our mulch is helping tackle key challenges faced by the EU rural development and environmental policies such as soil contamination, residue management and energy savings,” concludes Azevedo. 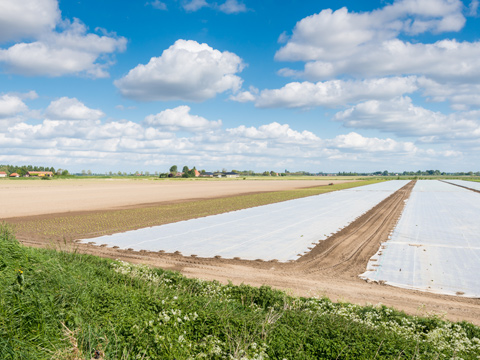