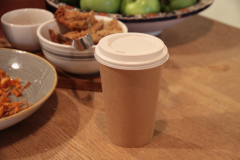 For the first time, a biobased material has been developed from which disposable cups and lids can be made made that are fully compostable and recyclable, while still performing like petroleum-based plastic under heat and stress.

Biome, a British producer of plant-based bioplastics that are 100% biodegradable and compostable, has unveiled a range of biobased plastics for cups and lids to enable retailers and packaging manufacturers to offer consumers a more sustainable option. As Biome Bioplastics CEO Paul Mines pointed out “For such a simple product, disposing of a single coffee cup is a very complex problem. Coffee drinkers are acting in good faith when they see recycling logos on their takeaway coffees but most cups are lined with oil-based plastic and the lids made of polystyrene making recycling impossible, even when placed in the right bin.

Market research conducted for Biome Bioplastics by consumer insight company Vision One revealed that most consumers want their takeaway coffee cups to be sustainable.
Specifically, these researchers found that almost two thirds of people would prefer cup lids to be made sustainably and 53% would be more likely to buy from shops using plant-based biodegradable cup products. Additionally, more than half of people thought takeaway coffee cups came at too much of a cost to the environment, and more than a third claimed they would avoid buying takeaway drinks because of this, while more than 60 per cent of people thought plant-based biodegradable plastics were a better option than oil-based plastics.

For the last five years, Biome Bioplastics has developed a range of biopolymers for coffee cups, lids and coffee pods based on natural and renewable resources including plant starches and tree by-products such as cellulose. 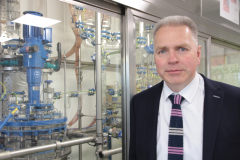 and lid combinations. The result being a bio-based takeaway cup disposable either in a paper recycling stream or food waste stream.In appropriate composting conditions our cups and lids will disappear to carbon dioxide and water within three months,” said Mines.

He added that Biome was empowering forward-thinking coffee retailers with a solution to address growing consumer concern.

“There are high-tech biopolymer materials being produced here in Britain that are ready to be deployed at scale for the market. Bioplastics can now perform almost exactly like petroleum-based plastics under mechanical stress and at boiling temperatures.”

“The shocking amount of landfill waste shows the urgent need for big brands to accelerate work in new, sustainable materials such as bioplastics. High street retailers can now give consumers what they want: a sustainable takeaway cup option that can either be properly recycled or composted.”