New TAPP water filter to be made from biodegradable PLA

Complaints about the taste of tap water have fuelled the trend for consuming bottled water instead, leading in turn to the massive accumulation of waste plastic bottles. Now, a Barcelona company is combatting the problem at the source: the water tap at home. 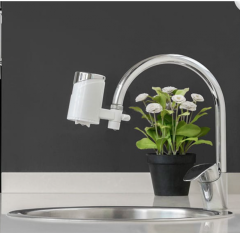 “I come from Sweden, and was used to drinking water from the tap that tasted good,” said Magnus Jern, founding partner of TAPP Water. “When I moved to Barcelona, I found that the water had an odour and tasted like chlorine. Instead of switching to bottled water, I decided it was time to do something about it.”
Together with four other partners, he first extensively researched and analysed the situation, and found that only 60% of the population consume tap water in the Mediterranean corridor of Spain, especially in Barcelona. For two years, they also studied filtration technologies, consulting with experts in the field of water, from private companies, universities and water quality institutes.
They also discovered that a good filter could eliminate the unpleasant taste and remove microplastics and the heavy metals leaching from old pipes – and TAPP Water was born.
After testing more than 50 different filters and technologies, and conducting blind tests with hundreds of people, as well as installation tests and analysis of water institutes to ensure that filters have the highest quality standards, a new filtering system was developed that that is being touted as “revolutionary technology.”
“What we discovered was that not much technological progress had been made over the last 30 years or so,” said Magnus. Mostly, activated carbon and carbon blocks were still being used.
In June 2016, the company launched its first filtration product, TAPP 1, designed in Barcelona and manufactured in Taiwan. Six months later, the company went one step further and released TAPP 1s, the perfect solution for filtering the water in the shower. Following the success of both products, TAPP Water launched TAPP 2, a new version of its flagship product with a more elegant design and new features – a Bluetooth sensor - in October 2017.
“Integrated in the TAPP 2 is the first 100% biodegradable filter on the market – globally,” said Magnus. Why a Bluetooth sensor? “Because, if people can follow the status of the filter on their phones, they become more engaged, and the impact is bigger,” Magnus pointed out. The sensor provides real-time data to a mobile device to track water consumption and battery life. The filter can calculate the consumption of water in real time and send an alert when the cartridge needs changing. “After the shelf life, about 3 months in an average household, the cartridge can be deposited in the recycling container of organic matter, without contaminating the environment with any kind of plastic waste,” he said.
The organic coconut fibre filter integrated into TAPP 2 eliminates the bad taste and odour of water, as well as chlorine, microplastics, agricultural chemicals, pesticides and other compounds that can remain in public water after sanitation, respecting those components that are beneficial to the body, such as magnesium or iron.
Magnus said that TAPP Water managed to help consumers avoid purchasing 75,000 bottles of plastic waste in 2016. “Our aim is to raise this figure to 10 million plastic bottles by the end of 2017, the equivalent of 50 football fields filled with 1.5-liter bottles.”
In addition to a thinner design, TAPP 2 is an improvement on its predecessor TAPP 1 as it

adds a Bluetooth sensor BLE 4.0, which provides real-time data to a mobile device to track water consumption and battery life. The filter can calculate the consumption of water in real time and send a warning when it is necessary to change the cartridge. After the shelf life, about 3 months in an average household, the cartridge can be deposited in the recycling container of organic matter, without contaminating the environment with any kind of plastic waste.
And the system saves money: “In Spain, the average price of bottled water per litre is around € 0.30, compared to the € 0.0023 that costs one litre of tap water in a city like London. Thus, filtered tap water is up to 130 times cheaper than bottled water.”
And the latest news? “We are raising money via a crowdfunding campaign to launch a TAPP Water filter made of a specially formulated biodegradable, home compostable PLA, replacing the ABS it is now made of. So, we are an environmentally responsible product made of environmentally responsible material.”